How to integrate your workflows with Jira using codemagic.yaml

Jira is an issue tracking and project management product developed by Atlassian. Many software development teams use it to maintain the visibility of their projects.

It offers a REST API that can be used in conjunction with your Codemagic workflows to add comments, upload attachments, or transition the status of an issue, story, or epic.

The following example shows how to set up integration with Jira using the codemagic.yaml configuration with a native iOS project but the approach is the same for Flutter, React Native, and native Android projects.

Add the codemagic.yaml to your project

Copy the codemagic.yaml from the starter project into the root of your repository. Then, update the environment variables as indicated and use the documentation links, where required, for the values related to building your app, code signing, and app publishing.

The JIRA_AUTH environment variable is a base64 encoded string which consists of the email address you log into Jira with and the Jira API token you created:

You can encode these credentials in the macOS Terminal using:

Alternatively, use an online tool to base64 encode this string.

This value is used in the Authorization header used in cURL requests to the Jira API.

This is the subdomain you chose when you set up your Jira account e.g. “YOUR_SUBDOMAIN.atlassian.net”. Put the subdomain including “atalassian.net” in the JIRA_BASE_URL environment variable.

Issues, epics, and stories have a unique id, usually in the format ‘XXXX-N’, and is visible on your issues either in the bottom right or top left when looking at an issue. Put this value in the JIRA_ISSUE environment variable.

If you want to transition your issue to another status, you will need to know what transition ids are available. You can obtain the available transition ids using a cURL request as documented in the Jira API documentation. Once you know the transition id then put this value in the JIRA_TRANSITION_ID environment variable.

Copy the .templates folder to the root of your project. This folder contains a template file called jira.json, which adds formatted comments to a Jira issue.

The Atlassian Document Format (ADF) is used to format the comment layout and style. Click here for more information about ADF and how to modify this template. 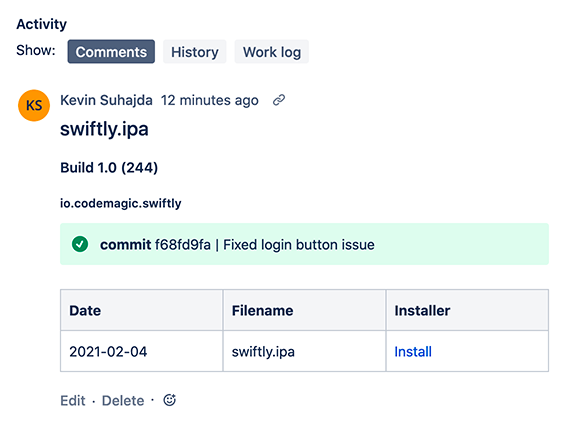 Note that it contains strings beginning with $, which the scripts use to replace values in the JSON using sed before it is added as JSON payload to the cURL requests.

The script section for publishing to Jira contains several actions which set environment variables, update the comment template, and then use cURL requests to add a comment and upload files to a specific Jira issue.

First, it uses jq (a command-line tool for parsing JSON) to parse the contents of the Codemagic environment variable $CM_ARTIFACT_LINKS to find information such as the articact URL, filename, bundle id, and version name and store the values in environment variables.

See this link about the JSON data that $CM_ARTIFACT_LINKS contains.

Getting help and support

If you are new to Codemagic and would like an introductory call to get your workflow set up, then please book a call with one of our onboarding specialists here.

Customers who have enabled billing can use the in-app chat widget to get support.

You can also get help in our Slack community here.